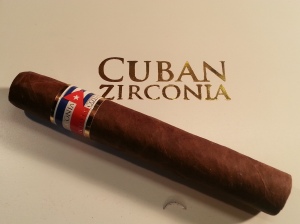 Dignity, commonly referred to as Dignidad (Latin) is a boutique cigar brand founded in 2010. The label’s DG monogram appears on most of its products, ranging from luxury cigars, labels, boxes, humidors, accessories, and clothing. Dignity is one of the world’s leading international boutique brands; it sells its products through boutique cigar lounges, airports, luxury hotels, and high-end private clubs. For two consecutive years Dignity has been named one of the world’s most unique boutique luxury brands. 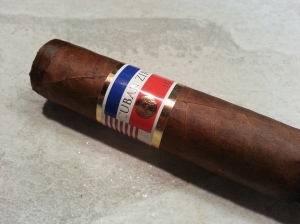 Dignity Premium Cigars hail from the world’s only existing pure ancestral, pre-embargo Cuban seeds – traced by genetic fingerprints to Cuban regions such as Pinar del Rio, Vuelta Abajo, Remedios, Artemisa, San Juan y Martinez of the 1940’s and 1950’s.  Their seed varieties were obtained from Habanesis developed in Cuba in 1907. This was the first standardized black tobacco seed and is the forefather to all modern Cuban tobaccos. Each true-to-type seed has been adapted in the high mountains of Costa Rica while retaining their genotypic and phenotypic characteristics.

The Cuban Zirconia is the latest creation by Dignity Cigars. The cigar is grown in the high mountains of Costa Rica using Cuban Seed Tobaccos. The unique Cuban Zirconia is smooth, rich and sweet with notes of caramel, vanilla, and honey, woody and earthy flavors.

The Cuban Zirconia has a gorgeous Habano wrapper with rich, earthy-sweet smells.  It was solid to the touch with a good draw.  It is well constructed with a close to even burn that held onto a dark grey ash.  The body and flavor slowly grow from medium bodied until it finishes medium-full.

The smoke is dense and filled with woody flavors that fill the air.  Even with its strong earthy quality, the Cuban Zirconia definitely has floral notes as well.  Overall, it is a good cigar with a nice aroma and complex flavors that are well developed. 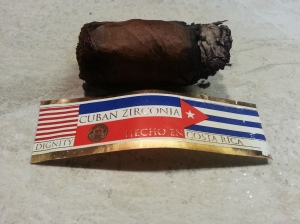 One thought on “Cuban Zirconia by Dignity Cigars” Leave a comment ›