Since 1980, the Trinidad Fundadores has been produced exclusively for Fidel Castro. The only boxes that left Cuba were gifts to foreign diplomats. On February of 1998, the brand was officially launched as an export in Trinidad, Cuba.

Trinidad is named after the beautiful 16th Century city of La Santisima Trinidad (The Holy Trinity), listed by UNESCO as a historical monument, which is situated on Cuba’s south coast.

Trinidad, as a Habano, dates back to 1969 but for many years, like Cohiba, it was made only for gifts to foreign diplomats. Not until 1998 was it released for general sale and then only in small quantities.

At the start there was only one size of Trinidad: Fundadores.  In 2003 three more sizes, the Reyes, the Coloniales and the Robusto Extra, were added to the range.  At the same time Trinidad’s livery and its cigar band were undated to recognize the prestige that the brand commanded.  Most recently, in 2009, the Trinidad Robustos T was introduced to the complement the brand’s range.

For several years Trinidad was made at El Laguito, the Cohiba factory, where it’s uniquely fragrant and aromatic, medium flavored blend of filler and binder leaves from the Vuelta Abajo zone was developed.

By the end of 2004 demand for Trinidad had outstripped the production capacity at El Laguito and it was decided that the manufacture of all the brand’s sizes should be transferred to Pinar del Rio City, the most important city of Vuelta Abajo.

All sizes are Tripa larga, Toalmente a Mano – long filler, totally had made vitolas.

The creamy brown wrapper of the Trinidad Fundadores has an unmistakable appearance with a cedar like aroma on the pre-light.  There is a noticeably pure, oily sheen covering this cigar.  Overall, it was very nice looking – seamless and smooth to the touch. 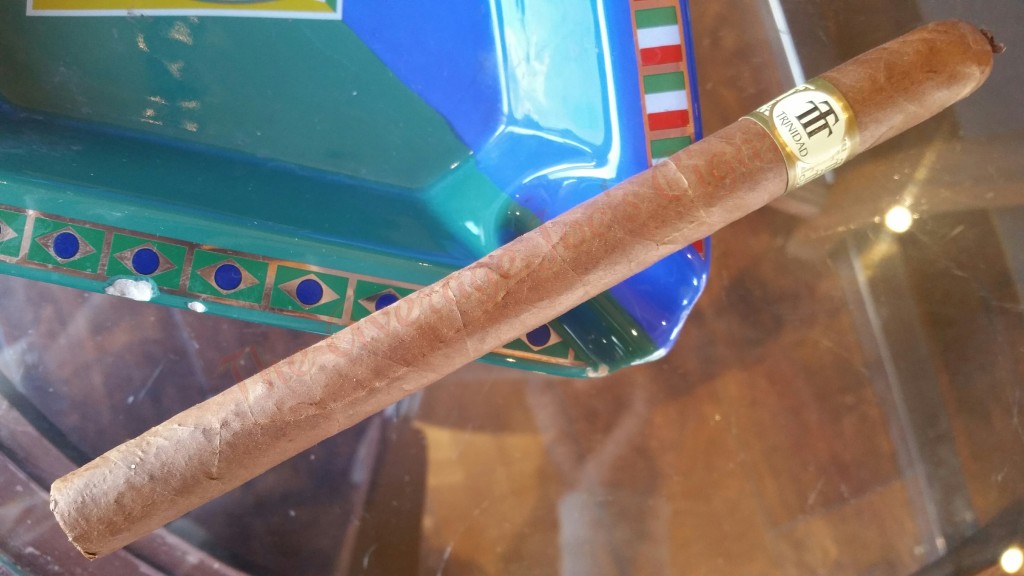 1st quarter: There is a firm draw of perfection.  It gave a tastefully smooth and creamy smoke texture that was full of rich and sweet bean flavors.  2nd quarter: Tons of tobacco flavors and hints of vanilla and caramel dominate the tasting notes of Fundadores.  It was an effortless smoking experience with lots of thick, creamy smoke.  3rd quarter: Concentrated flavors are well complimented by its shape.  Spice and plenty of earthy smoke were in the air, providing a very splendid aroma.  4th quarter: This cigar ended with big earthy and tobacco notes.  The excellent construction provided an even burn and good draw to the end.

The Fundadores Lancero is one of Cuba’s finest cigars produced, as evidenced by its superb construction.  There was a great medium flavor profile with touches of spice, creaminess and plenty of great cedary aromas.