Drew Estate announced today that the company will begin shipping Florida Sun Grown “FSG” Cigars nationally to DDRP accounts.  This brand features tobacco grown in Clermont, Florida, by Jeff Borysiewicz, owner of Corona Cigar Company and the Florida Sun Grown Farm. The brand will be displayed in Drew Estate’s booth (Booth #2608) at the IPCPR Convention and Tradeshow, which will be held July 10 – 14, 2017 in Las Vegas, Nevada. 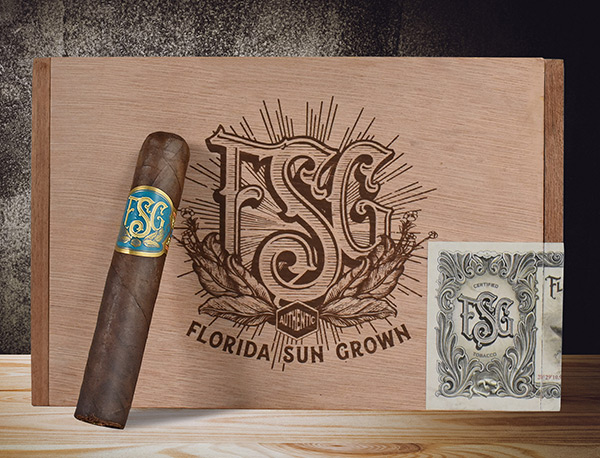 The “FSG” by Drew Estate project began in 2011 and debuted in 2016 at the Florida Barn Smoker. The core FSG blend features Florida Sun Grown filler as an accent tobacco to select Nicaraguan fillers which adds an authentic Florida agricultural nuance to this unique and captivating blend. The binder is a Habano seed tobacco from Honduras and the cigar is finished off with a lush Brazilian Mata Fina wrapper.

In addition to four core sizes, Drew Estate is releasing a Limited Edition Trunk-Pressed Toro. This prized cigar features its own unique blend which utilizes a Connecticut Broadleaf wrapper, Mexican binder, and Florida Sun Grown filler tobacco, along with fillers from Nicaragua and Honduras.

The Florida Sun Grown “FSG” by Drew Estate is available for purchase in the following vitolas from Drew Diplomat Retailers:

From the Florida Sun Grown Farm in Clermont, Florida Jeff Borysiewicz said, “Drew Estate’s commitment to the American tobacco movement is unmatched. From the Connecticut River Valley, to barns in Kentucky, and to my farm in Clermont, Florida, nobody supports American leaf farmers like Drew Estate. Since 2010 I’ve pioneered the resurgence of Florida tobacco believing that consumers in the United States would be excited to bring American tobacco agriculture back to the forefront. When I purchased the land for our farm, I spent countless hours analyzing the temperature, sun-light, wind, humidity, and altitude that would bring my farm as close to the conditions of Pinar del Rio, Cuba as possible. These are very exciting times for this farm and for American tobacco.”

From his Wynwood Safehouse, President and Founder of Drew Estate, Jonathan Drew said, “My friendship with Jeff spans almost 20 years. When Jeff first approached me about his idea to bring Florida tobacco back to the premium cigar industry I promised him that Drew Estate would stand by his side, just as we have done with the farmers in Connecticut and Kentucky. Pioneering anything is never easy, but what Jeff and his entire company have done is a truly breakthrough innovation. Drew Estate is genuinely committed to American tobacco.”

The Florida Sun Grown line will begin shipping to Drew Diplomat Retailers at the end of July.

Fans of Florida Sun Grown by Drew Estate are encouraged to download Drew Diplomat the official mobile application of Drew Estate – The Rebirth of Cigars which is now available in the App Store for iPhone®, and iPod Touch® and on Google Play™ for Android™. For more information head to http://drewdiplomat.com

Florida Sun Grown Farm
Founded in 2012, Florida Sun Grown is the first farm in Florida to grow long filler cigar tobacco in many years; a tradition that ended in 1977 as many tobacco farms closed shop and relocated  to other regions.  Located in beautiful Clermont Florida, Florida Sun Grown is the latest enterprise of president and founder of Corona Cigar Company, Jeff Borysiewicz.  The farm is dedicated to growing premium tobacco that will be utilized in the production of fine cigars worldwide.  The first test crop was planted in March 2013 and yielded roughly 800 pounds of Criollo and Corojo tobacco.  FSG has since increased production and is well on its way to reestablishing a culture of premium tobacco farming in Florida.