Founded in 2003 by former Marine Matt Booth, Room101 has become a luxury lifestyle brand for those who demand quality with an edge.  His clientele is very diverse and covers everyone from corporate boardrooms to the rock and roll stage.  Over the past 11 years, Room101 and Matt Booth have been featured in top lifestyle, fashion, and specialty magazines worldwide along with multiple appearances on major television networks.  World domination is their mission! 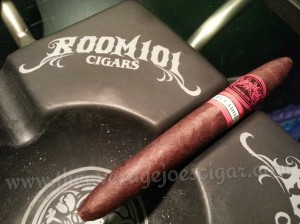 The Room 101 Namakubi EC has a gorgeous dark brown wrapper with some tooth.  It is both rich and oily in appearance.  Once cut, a dry draw was completed that gave off an earthy pre-light aroma with more sweetness.

Once lit, the Namakubi had a very slight resistance on the draw.  Into the first quarter of the cigar, spice and earthiness begin to reveal themselves.  An upfront profile was given with a medium to full-strength.  It produced a large amount of thick and flavorful smoke that lingered in the air like clouds.  As it continued burning into the second and third quarters, flavors were very well balanced with sweetness, earthiness and hints of fruits.  You will also detect trace amounts of coffee notes that further enhance the great aroma.  Once you reach the final quarter of the Namakubi EC, its intensity will reach a full effect greatness.

The Room 101 Namakubi EC has outstanding construction with a remarkable burn and aroma.  With its clean draw and impressive flavor profile, the cigar is very tasty and effortless to enjoy.  While it is complex, it is not too much for the Average Joe to appreciate.  This extremely well-made cigar by Room 101 Cigars is a must try. 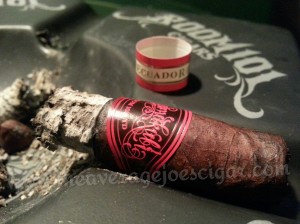