In an industry built on name recognition and reputation, Rocky Patel’s passion has brought his brand to heights unseen by most boutique cigar manufacturers.  His hard work and long hours have been paying off in big ways.  A survivor of the cigar boom, Patel has outlasted his competition with unrivaled persistence on his quest for perfection.  With a grueling travel schedule, office responsibilities and production, Rocky still maintains the enthusiasm that he has had since day one. As he travels the world, putting his cigars in the mouths of his consumers, his passion extends beyond the retailer, allowing his customers the experience of meeting the man behind their favorite smokes.  Rocky Patel has created a company that has out shined even those created by multimillion-dollar corporations, and he’s doing it one customer at a time.

It was the mid-1990s when the premium cigar market was drastically changing.  Rocky Patel lived and worked in Los Angeles as an entertainment and product liability lawyer.  Through a friend, Rocky was introduced to cigars and was instantly fascinated by them.  He then became one of the original founding members of the Grand Havana Club in Los Angeles.  While dabbling in various investment ventures, Rocky was approached with a business plan to manufacture cigars.  In 1996 at the RTDA in Cincinnati, Ohio, Indian Tabac Cigar Co. was formally introduced.  With his eye-popping packaging, Patel went against the grain and this strategy has continued to pay off.  While meeting new and unique people everywhere he goes Rocky also hosts trips to Honduras for his customers, providing them with a one of a kind experience of witnessing his operation and passion first hand.

In 2003, Rocky put aside the Indian Tabac brand name he spent years building, to focus on the Rocky Patel Vintage Series.  A superior smoke to anything Patel had created previous, the Vintage Series was made up of premium quality aged tobaccos.  In Honduras, Rocky discovered unused bales of old Honduran-grown broadleaf and Ecuadorian Sumatra.  He used these two different tobaccos to create both lines of the Vintage Series.  The hard work Patel put into Vintage was worth it as he soon found out that the older tobacco performed significantly better than anything he had used before.  He also cut back on production to focus on quality control.  Instead of 400 to 500 Cigars being rolled a day, Rocky cut it back to 250.  This left room for unprecedented craftsmanship and his attention to quality has produced a fine line of cigars.

Due to Rocky’s charisma, enthusiasm and personal approach, the cigar industry has definitely taken notice.  No one can question his methods as the proof is in the pudding.  However, while his company is thriving, Rocky is still on his quest for perfection.  His greatest wish is to create the optimal tobacco mixture that makes his cigars ‘immortal’.  Rocky believes that his cigars should evolve into the prime example for quality for generations.  His hard work is paying off as he is building a brand that is being recognized everywhere. Rocky assures his consumers that, “You can expect more and you will get more”.

What a great looking cigar a nice dark and veiny wrapper with noticeable tooth and oils. A very light pre-light smell of some woody and some hints of sweetness at the foot.

The cigar started out with a solid to the touch with an effortlessly smooth draw. It had a a texture with a nice amount of spice along with a sweet flavor. It delivered smoke with a big aroma and rich full flavored to the palate.

Continuing much of the same from the 1st third generous amount smoke very good amount of spicy smoke with hints of pepper notes on the palate. Steady with some black pepper notes although required a few touch-ups but didn’t slow down the consistent rich aroma. Starting to notice a little more earthiness which would be nice once into the final third.

Getting a roasted nut like flavor on my palate along with some more sweetness. Cream textured smoke to the palate as well. A nice amount of peppery spices in the nose. Notes with cedar developed that hinted to dominated but never got there. 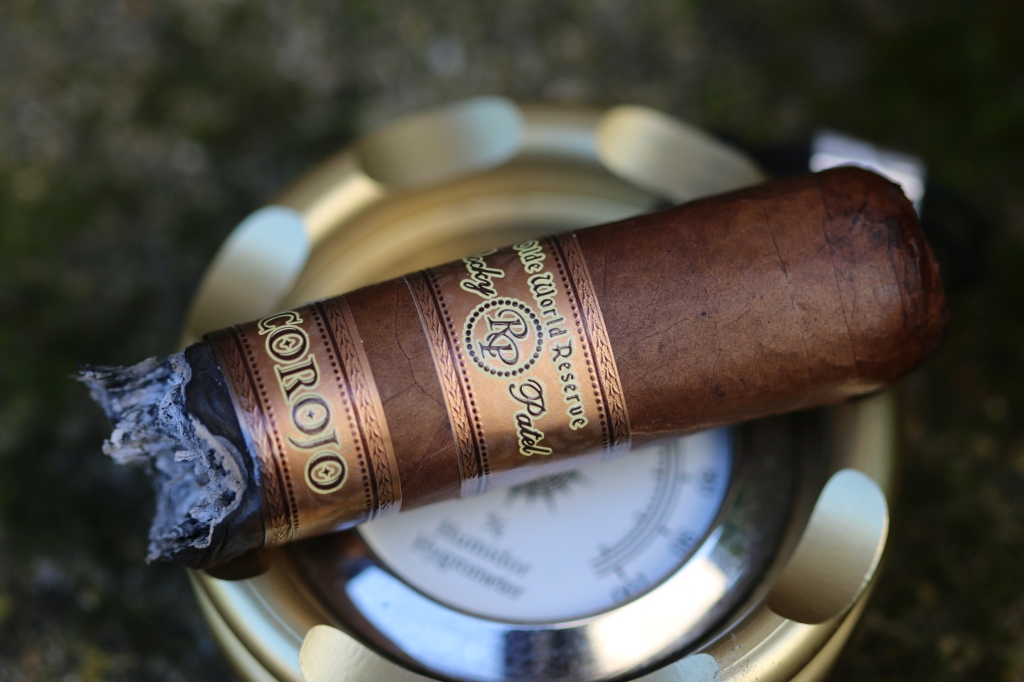 Overall medium bodied with a lot of flavor and great aroma. Some sweet notes developed with a long and full flavor finish. A very good construction and really wish the burn was the same just a little too many touch ups for me. With that being said it still maintained a solid profile from start to finish. The Corojo was an steady cigar that had good flavors and balance.