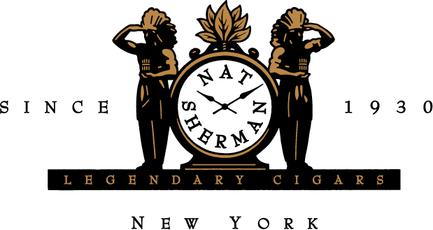 In 1929, Nat Sherman, a Hungarian immigrant won partial ownership of a small tobacco manufacturer in a card game. He bought out the other partners shortly thereafter and the rest is history.

Three Generations of Tobacconists in the Nat Sherman family. During the 1990’s, the third generation of Shermans – Bill, Michelle, and Larry – joined their father in running the family business.

The Sherman Family relocated the store to its current home at 12 East 42nd Street, affectionately known as “The Townhouse”. The Townhouse continues to flourish as the premier tobacconist in NYC today.

Appearance :
A new look for Nat Sherman is the band and it looks amazing. This is a classic appearance and shape great looking brown wrapper that felt great in the hand. A nice oily sheen with a box pressed shape. Light rich pre-light smell and taste.

1st Third
There was no resistance on the draw, which made this cigar extremely smooth and effortless. The cigar started off with smoke that had a refined quality with a smooth balance and subtle spice that was notice in the nose an also lingered on the palate.

2nd Third:
It had a slow and remarkably even burn, it produced a generous amount of hardy smoke. The smoke had an increase in black peppery notes. It was very noticeably the body was increasing. A spicy creamy texture as the cigar smoked with ease. The aroma was full and rich with sweet and spicy cedar notes carrying over into the taste.

Final 3rd:
The flavor was rich with a lot of earthy, peppery spices and some chocolaty note, which was also noticed in the aroma. The cigar built in character as it was smoked, developing the whole way through.

Final Thoughts:
The cigar has a long full flavored, medium almost full-bodied finish that left a lasting impression. Great overall construction with an even burn offering a lot of spicy delicate flavors yet had complexity and finesse. A sexy large format cigar with a big personality an ideal cigar to end the evening.