Inspired by hot rods and pin-up girls, CAO Flathead is a box pressed collection that hits on all cylinders. Hand-shaped to deliver a striking flat top, the cigar features a brawny Connecticut Broadleaf wrapper and a blend that’s heavy on Nicaraguan leaf. Its front marks are named for engine parts, but the tribute to muscle cars doesn’t end there. Flathead gives a nod to the muscle car engine, with a lid that’s easily removed and used as wall art. There’s also a collectible, pin-up girl flysheet that’s enclosed in the box. 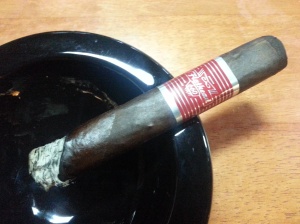 The Flathead V660 Carb has a very nice dark Connecticut Broadleaf wrapper with sweet aroma and good pre-light flavor.  With the box-press it seem to have an old world feel.  There were some noticeable oils with some veiny appearance.  Also the cigar had a very clean texture on my palette. 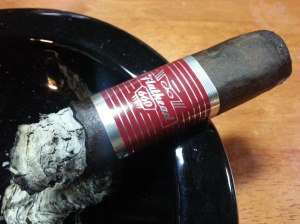 Right away the Flathead gave in to very rich notes and some floral, earthiness taste which stayed coincident throughout the cigar.  A very smooth draw gave a lot of rich, full flavored smoke in the air and on my palette.

The smoking characteristics of the V660 were good.  Mid-way through the body it burned a little to one side and corrected itself later.  I had to relight two times as towards the head.  These minor flaws were very simple to compare to the great aroma, white smoke and excellent taste the Flathead V660 had.

The cigar was packed with a lot of flavor which ended with a small taste of toast on my palette.  A great size with an easygoing aroma with a long and rich finish.